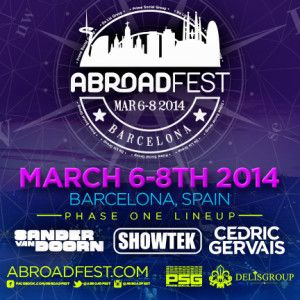 AbroadFest recently announced Phase 1 of their 2014 lineup featuring Sander van Doorn, Showtek, and Cedric Gervais! More artists are to be announced in Phase 2, which will be announced at a later date.

Thursday night will be hosted at Opium and will feature sets from Sander van Doorn, Showtek, and more. Tickets are currently on show for Thursday night of AbroadFest.

The following night on March 7 will feature Cedric Gervais for the first time ever in Barcelona at Teatro Principal.

In addition to the Thursday and Friday night events, free events will take place as a part of AbroadFest during the daytime to help you recover and prepare for the night’s events. Also, a special Saturday night events with artists TBA will also take place at Sotavento Club.

3-day passes for admission to all AbroadFest events are going fast. 3-day passes as well as individual night tickets are on sale here: http://abroadfest.com/tickets/