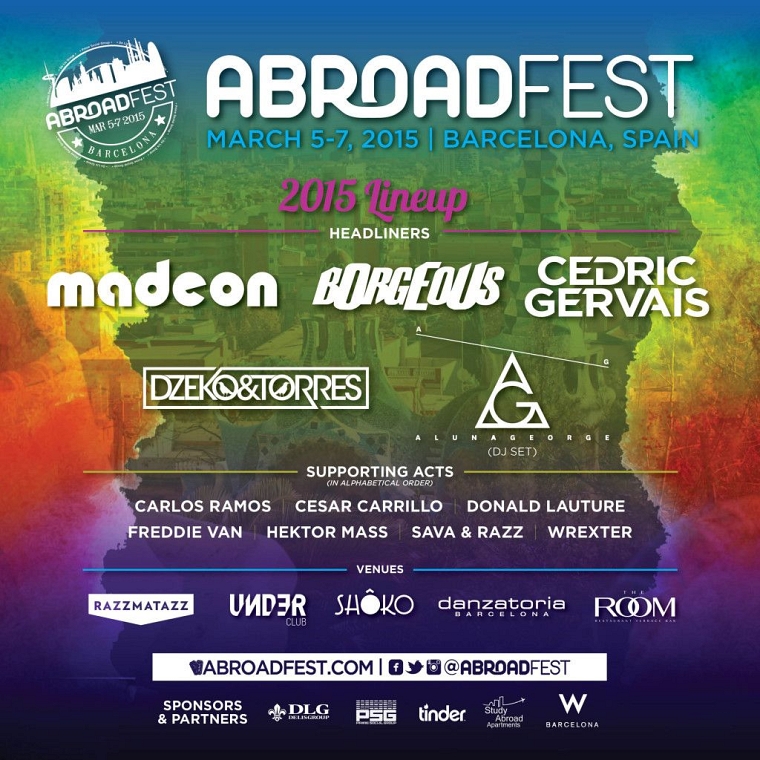 De Lis Group and Prime Social Group are thrilled to announce the lineup for the 3rd annual ABROADFEST! Following the success from the previous two sell-out years, ABROADFEST is having its biggest lineup to date. ABROADFEST 2015 features MADEON, CEDRIC GERVAIS, BORGEOUS, DZEKO AND TORRES, ALUNAGEORGE & more!

ABROADFEST Night One (Thursday, March 5th) kicks off at one of Barcelona’s premier nightclubs, Razzmatazz (Carrer Almogàvers, 122) with DZEKO & TORRES. The headliner of the night is referred by the Miami New Times as “one of the most impressive acts in EDM,” MADEON. This will be one of MADEON’s first shows presenting songs off his forthcoming debut album out on March 31, Adventure.

“Selling out of the 3-Day passes before announcing talent makes us incredibly excited about the ABROADFEST brand,” says Prime Social Group Co-Founder, Zach Ruben. “ABROADFEST has become an annual event that is about the experience of meeting up with your friends from all over the world and partying together in one of Europe’s finest cities, Barcelona.”

ABROADFEST is in the 3rd consecutive SOLD OUT year featuring the world’s top DJs for students studying abroad. Limited amount of single day tickets solely remain for Night One (Thursday) while supplies last. Visit www.abroadfest.com or follow @ABROADFEST on social media for all of the latest information. ABROADFEST attendees are highly encouraged to book at the W Hotel for a luxurious stay while enjoying the festival.